Served by lines 3 and 11 of the Parisian metro, Arts et Métiers station is a quiet stop tucked away in the pleasant streets of the 3rd arrondissement. It is named after the Conservatoire national des arts et métiers, a higher education institution founded in 1794, during the French Revolution. Although its name might suggest otherwise, the Conservatoire is a school of engineering and scientific research, which is one of the Grandes écoles of the French university system.

While the Line 3 platforms of the station are covered in the familiar white tiling, interspersed with posters and billboards, you are likely to be surprised when your train draws into the Line 11 platform. In 1994, comic artist François Schuiten redesigned the space in order to celebrate the bicentenary of the Conservatoire. The whole arch of the platform is covered with copper sheeting, and a series of cogs embedded into the ceiling evoke a feel of the work of this educational institution. Small portholes in the walls look out on paintings of different scientific inventions, giving the station the feel of a spaceship or a time machine.

This museum, which is attached to the Conservatoire of the same name, contains all the machines and contraptions which were used within the latter institution during the 19th and 20th centuries.

The unmistakable form of the Pompidou Centre cuts a distinctive figure onto the Parisian cityscape, with its blue piping and glass tubes. Inside, you will find a host of modern and contemporary art exhibitions, as well as an amazing view of the city from the top floor, and an extensive reference library at the back. You can easily spend a whole afternoon exploring its different galleries and levels.

As our instructors will know, our office is situated just down the road from this metro station. Why not pop by and pay us a visit?! 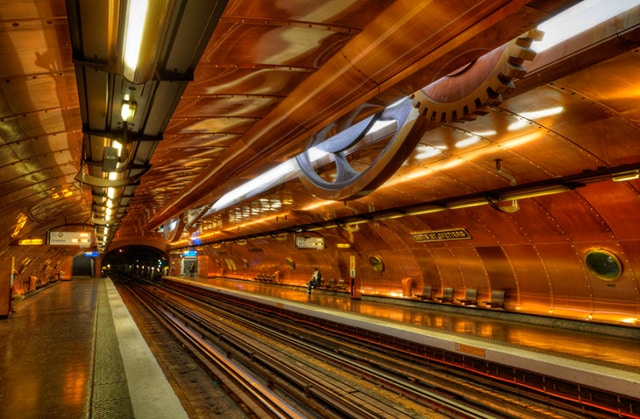