Père Lachaise metro station is located on the border of the 11th and 20th arrondissements in Paris. Opened officially on the 31st January 1903 as an extension of the line 2, this station now serves the line 2 and 3.

This particular station takes its namesake from the infamous Parisian Cemetery located close by, Père Lachaise Cemetery. This Parisian landmark is named after Père François d’Aix de La Chaise, confessor to Louis XIV of France. The platforms are decorated in an ‘Andreu-Motte’ style, implemented in various metro stations in Paris between the years of 1974 and 1984 by architect Paul Andreu and decorator Joseph-André Motte. This largely consists of the mixture of the traditional white tiles with the introduction of a little bit of colour, usually two coloured lines.

The station is evidently located very close to the Père Lachaise Cemetery. This is the largest cemetery in the city of Paris and is notable for being the first garden cemetery. Each year Père Lachaise Cemetery has more than 3.5 million visitors, making it the most visited cemetery in the world. It is a beautiful space and within it are the graves of some very famous people including Oscar Wilde, Edith Piaf and James Morrison.

The neighbourhood that surrounds this station has been recognised for its village-like feel. Following recent gentrification this arrondissement has become the regular stomping ground of young Parisians and it has seen the opening up of a flux of bars and restaurants that often have a lively and youthful buzz. 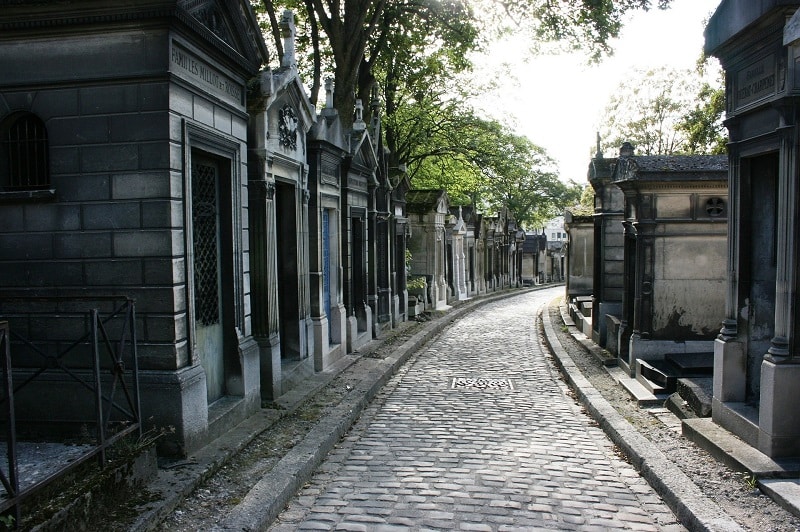