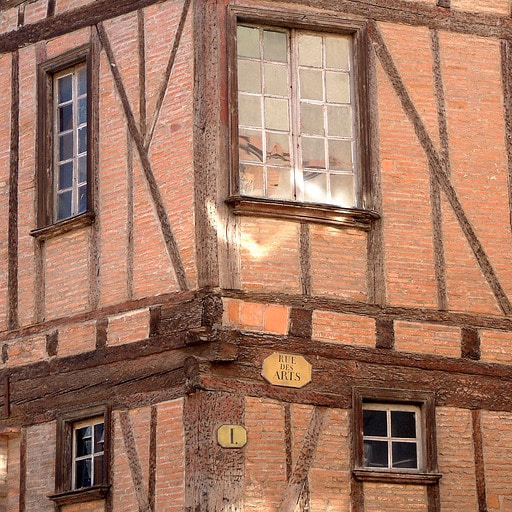 This lively area is known as the Old Quarter of Toulouse for its historical roots dating back to the Roman era. Stretching from the Place du Salin and the Place d’Esquirol, the Carmes district has been described as a small village haven in amongst the big city.

During the Roman period this area crossed the cardo maximus, the main channel of communication between the north gate (Capitole) and the southern gate (la porte Narbonnaise by the Palais de justice). As a result this area quickly developed. By the beginning of the Middle Ages the influx of people moving to this area, saw the construction of many more houses to accommodate them and the arrival of the convent of the religious order of Carmes. During the French Revolution the church and other religious buildings became national property. Thus the location of the old convent was used by many merchants to sell their goods and was soon converted into the first ‘Halle’ (covered market) of Toulouse built within a wooden structure. The market was significantly hindered by the numerous fires that occurred at the time and thus was constantly being rebuilt and redeveloped. In 1863, concerns over hygiene particularly as a result of its increasing popularity saw its wooden structure replaced with a metal framework. This structure was and remains particularly striking as its impressive frame of iron and zinc contrasted dramatically with its terracotta facades. Today, the Marché des Carmes is undoubtedly the heart of this neighbourhood and is still particularly impressive. The Marché was redesigned in the 1960s by architect Georges Candilis and is now a ‘marché-parking’ where the market can be found on the ground floor and car parking on different levels yet it remains one of the most important food markets in Toulouse and most definitely sets the rhythm of life in the city.

Whilst the market may be the prime focus of this area the whole neighbourhood is also noted for its beautiful historic buildings. Stroll down Rue des Filatiers, one of the most important streets in this neighbourhood and here you can find La Maison de Jean Calas, notable for its judicial history.

Today this area is extremely popular. Filled with bookshops, cafes, restaurants and bars you will not find yourself short of things to do in this beautiful historic neighbourhood.