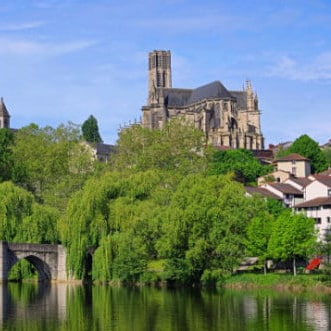 Limoges, a small city located in the centre west of France, has a surprisingly rich cultural life. Every year, it hosts a huge number of different fairs and conventions, from the Foire des Saints Innocents, a Christmas market established in 1566 which takes place on 28th December, to Lire à Limoges, a literary festival which attracts 60,000 visitors every year. It also plays host to Le Festival 1001 Notes, which strives to maintain Classical music’s place in the modern world by inviting young musicians to perform and record their work. If music is not your thing, then maybe you would prefer Itinéraires Photographiques en Limousin, or le Marché des Artistes. Although these markets and fairs only take place at certain times of year, it is always possible to appreciate Limoges’ artistic scene, by visiting one of its many glass or ceramic workshops.

As well as this buzzing cultural activity, the city has also conserved a unique and tangible trace of its history. During the town’s Roman period, underground aqueducts were constructed, and in the Middle Ages, to make space for storage, these were extended into a network of tunnels, cellars and wells. This hidden city can still be visited today, and is a great place to go if you want to get a feel for the history of today’s town.

Limoges airport is accessible from a number of UK and French airports with budget airlines, making it a great place to meet up with friends. You can also get there by train in just 3 hours from Paris, to see the world-famous station.