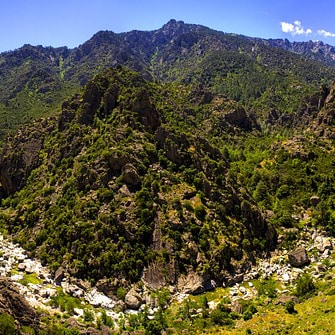 Corsica (or “La Corse” in French) is a island in the Mediterranean Sea and one of the 18 regions of France. It is located southeast of the French mainland and west of the Italian Peninsula and is famed for its very diverse and scenic coastline. In fact, a ridge of mountains makes up two-thirds of the island.

While being part of France, Corsica is also designated as a territorial collectivity and as such, Corsica enjoys a greater degree of autonomy than other French regions. Although French is the official language, many of the locals speak Corsican, a language in its own right. In terms of cuisine, Corsica is well known for its particularly smelly cheese called, ‘casgiu merzu’. Translated into English as “rotten cheese”, this cheese is made from sheep or goat milk and often contains live maggots!

to See & Do in Corsica