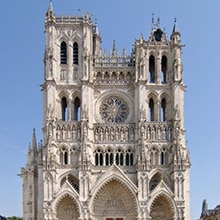 We’re bringing you another riverside city this month to discover, so welcome to Amiens: the city on the Somme! It is known for its Gothic architecture and its link to the famous science fiction author, Jules Verne. Amiens also has historical significance because it was a key location and heavily fought over in both the First and Second World Wars. Like many regions in France, the city has its own culinary specialities such as: ‘macarons d’Amiens’ , ‘tuiles amiénoises’ and ‘la ficelle Picarde’.

Amiens was first a settlement inhabited by the Gauls and was called Samarobriva (“Somme bridge”). The Romans then occupied the area and called it Ambianum after the previous tribe who lived there. Only in 1185 was the city joined to the Crown of France.

to See & Do In amiens