The King of the gardeners, André Le Nôtre is responsible for making the French garden style famous throughout Europe. He designed some of the finest gardens of the seventeenth century, with Versailles his most famous masterpiece of all. His talents earnt him a sizable fortune and an international reputation of excellence.

Born in 1613 and in service to the monarchy from 1635, Le Nôtre began his career as the gardener of Gaston d’Orléans, an uncle of Louis XIV. Growing up in a family of gardeners to the King at the start of the sixteenth century, he was trained in the Tuileries gardens. Here he renovated and developed the space, creating the vast perspective onto the Champs-Elysées. His work for Fouquet in Vaux-le-Vicomte in 1656 1661 brought him further glory and fortune.

Le Nôtre was summoned by Louis XIV to Versailles in 1662, at which time the talented gardener had been working on the gardens of Chantilly for the Grand Condé. Presented with the primitive garden of Louis XIII, Le Nôtre planned out close to the Château two large parterres, a hallmark of the gardens of the French Renaissance period. He remodelled the great east-west wing, which he intended to prolong into an endless perspective.

At Versailles, Le Nôtre refined his gardening expertise and techniques: the principal walkways were interspliced with secondary paths surrounding the groves; trellises and tree-covered archways formed vast walls of greenery that emphasised the sense of perspective; original ceramics and water features contrasted with the rigorous symmetry of the wood frameworks. Relying heavily on water, Le Nôtre created a play on shadow and sunlight by alternating shady places with clearer areas. The parterres and principal walks were dotted with statues and clipped yew hedges in peculiar shapes, rendering Versailles a key figure of topiary art.

This keen attention to detail and symmetry can be acknowledged in some of the other lesser-known achievements of Le Nôtre: in 1665, he spruced up the gardens at Saint-Cloud for the Duke of Orléans, a few years afterwards he redesigned the Sceaux gardens for Colbert and he later set to work on the Clagny gardens for Mme de Montespan in 1674. He was knighted in 1675 and remained a loyal and close friend to the King. In return, he received part of his art collection in 1693. 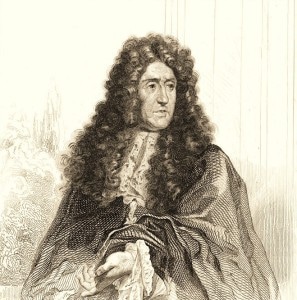